«I can promise and I promise.» Undoubtedly the passing away of Adolfo Suarez last week was a monumental event. I managed to join the media cattle pen outside the Congress when the funeral cortege arrived and was fortunate to be able to walk up the carpeted steps and enter the main entrance to file pass the flag draped coffin as it lay in state, like the thousands of people of all generations who had spent hours lining the streets to pay their last respects to the man who brought democracy to Spain. 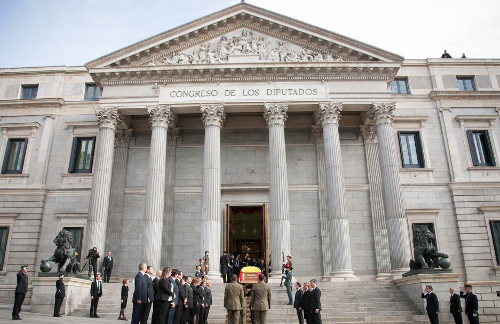 The media coverage lasted for days expounding the huge contribution and virtues of the man, who together with King Juan Carlos, was responsible for the Transicion after forty years of dictatorship. Many of the articles written by his old political colleagues, rivals and journalists gave a fascinating insight into the man and this period of Spain's recent past. But all the tributes to the integrity and commitment of Suarez by the politicians smacked of hypocrisy seeing as how Suarez was ignored totally after he left office and they have failed miserably to follow his example.

I was present at the European elections conference of the Madrid PP, held in the luxurious surroundings of the Melià Castilla hotel, where the usual privileged elite of the party and their militant supporters held a love-in of self-congratulation as if the crisis did not exist, but strangely did not choose a candidate. The most moving moment was Esperanza Aguirre asking for forgiveness for all the corruption within the PP. I am sure the Spanish people would accept her mea-culpa but only after they all resign and repay the money they pocketed illegally.

This month's batch of bad taste and contempt for the people includes Ignacio González, President of the Madrid Regional Government, who prior to the meeting, had accused the organizers of the March for Dignity demonstration of being extremists, the Madrid bosses union electing as its new President, Arturo Fernández, suspected of corruption so soon after, previous President, Díaz Ferrán, was imprisoned for fraud, and Miguel Blesa, ex Caja Madrid boss, stating arrogantly that pensioners, who had lost their savings, knew all about investing.

Spain is now at the bottom of the list, with Rumania, of EU countries with high levels of child poverty and must be near the top of the list for domestic violence. At the same time young educated Spaniards are leaving the country in droves to find jobs. And all the Government can do is plan a law which restricts civil liberties and prevents demonstrations in the capital. It is a terrible legacy for the Government and politicians of all parties. There would be less protest marches if the Government did more for the people. Adolfo Suárez must already be shedding tears in his tomb seeing how his country has been ruined by the greed, corruption and contempt for the people by the political, financial and business class.

France's local election results showed a similar rejection of Government policies which totally ignore the will of the people. Will the new Spanish PM of France change things or will it be the last Valls? I also think that Spain's other representative Anne Hidalgo's victory in Paris had more to do with the popularity of her old boss, Bertrand Delanoë and a rejection of the too pushy, NKM (Nathalie Kosciusko-Morizet)

There was also the growing crisis in the Crimea with Putin virtually putting two fingers up to the West. Despite all the warnings; «there will be serious repercussions» or «we will bring sanctions to bear» there does not seem much the EU or the US can do, especially since so much of our gas is supplied by Russia. Surely our political strategists must have realised that after the breakup of the USSR and allowing ex-communist countries to join the EU and Nato, Ukraine and the Crimean naval bases was a bridge too far. If there are sanctions, I would like to see the freezing of all the Oligarchs wealth which they took from the Russian people and put in Western bank accounts or Real Estate, (or soccer clubs.) The Oligarchs are all part of Putin's family. «Hijos de Putin» as one would say in Spanish.

Of course the missing Malaysian airline also had everybody hooked to their TVs, mobiles, internet, Ipads and radios as the mystery deepened as to how a modern aircraft with over 200 people onboard could disappear without any trace. It became worrying to learn that thousands of people might be travelling and wandering around our cities with false identities, that airport security and passport control is not so safe, and in an age of surveillance, satellites and radar, nobody was able to track its route, unless military secrets prevented any news from being announced. For the families of the passengers and crew, the uncertainty has been terrible.

Immigration never leaves the news. Germany has now woken up to the fact that the free movement of people is in fact one way traffic from east to west. This is not surprising given the vast disparity in living standards. It is another example of the lack of planning of the European Union. And how long can Spain tolerate what is an invasion of its territories in Melilla and Ceuta, or Italy, Lampedusa? The only destination seems to be Western Europe, which cannot cope with the influx. Walls and fences will never stop illegal immigration so either we open borders and extend a welcome to everyone who wants to come and live here or make it clear that illegal immigrants will have to return home and not end up in camps for years. Most of the immigrants are neither refugees nor asylum seekers but simply like the idea of living in Western Europe even though they often come from nations which are now as rich as many European countries. It is a subject which generates controversy and divides so many people, but it will have to be dealt with.

The problem of Madrid's radials has now extended to Brussels. Surely the solution is for the Government to take back the toll roads and give the private operators some small amount of compensation. Then the toll gates should be torn down so the autopistas become free autovías for the people. I say remove all Europe's toll roads, which have become cash machines for private operators and replace them with an annual tax.

On a lighter note, earlier in the month the Oscar ceremonies handed out their usual stock of awards. I always find it odd that the nominations at the Bafta, Golden Globe and Oscar ceremonies are limited to the same few movies. Surely there must be many others worthy of being nominated or do the venues accommodate a limited number of people? I read that the Dallas Buyer's Club, which I knew very little about, if at all, won three awards, Best Actor, Best supporting Actor and Best Hairdresser! Awards seem to be handed out for everything these days; cars, restaurants, pets, estate agents, airlines, even award winning plumbers, although it is never quite clear who actually awards the awards.

For once «El Clásico» was overshadowed although it turned out to be one of the most exciting encounters for many seasons, complete with controversy. Then four days later Real Madrid lost again, this time to Seville, who scored their winning goal while Gareth Bale was sitting at the edge of the pitch changing his boots. Poor Gareth had to face the wrath of supporters and the club and if Real Madrid fails to win the Liga, my advice to him would be to get out of town.

Toledo is at the centre of the art scene this year celebrating the 400th anniversary of the death of El Greco. The organisers are the Fundación El Greco, which has procured many works from around the world housed in a specially designed exhibition in the Museo de Santa Cruz. But what makes this exhibition so remarkable is that many of El Greco's works are housed permanently in the cathedral, convents, hospitals and churches in the city where he originally painted the altarpieces, as well as in the house, now a museum, where he lived from 1577 until his death in 1614. All are within walking distance in the maze of narrow cobbled streets and squares of the city except the Hospital of the Lady of Charity in nearby Illescas. Toledo is one of those rare historic cities whose skyline has hardly changed. One of El Greco's most renowned works, View of Toledo, was taken from across the river Tagus, which winds around the city and the view is almost the same today.

I have just heard from France that Julie Gayet has won damages of €15000 from a magazine which published photos of her with François Hollande. Everybody who has had a photo with the French President please step forward to claim your prize. These damages are an affront to hard working people. I suggest the press and photographers boycott this lady and all celebrities who take them to court. If courts have to punish the press, which may be justified, make them pay the damages to charity, not the celebrities who thrive on publicity. This should apply to all those who had their phones hacked in the UK and claimed fortunes. They never endured pain or suffered and when these sums are compared to the often trivial amounts paid out for permanent physical injuries etc there is something wrong in our society.

On the subject of injuries I had a minor problem which required a visit to the urgencias at the Hospital Universitario de la Princesa in Madrid, which was on the list to be privatised. Of course it takes more time as public hospitals tend to be more crowded than private ones, but the service was very efficient, the doctors very competent, the equipment and facilities first class and everyone extremely friendly. It demonstrated the importance of a public health service.

Finally I loved the story about the 14 year old who worked out how to save the U S Government $300million simply by changing the type face on documents from Times New Roman to Garamond. Obama should give him a role in the Government to cut costs.