Cuba’s future
opinión
Peter Fieldman | 1 de abril de 2015
Peter Fieldman Cuba
Visiting Cuba before the demise of the current political regime was a longstanding dream of mine and it seems I made it just in time since President Obama has finally started the long overdue negotiations to end the 50 year isolation of the island. I chose a fifteen day circuit tour to learn as much as possible about the country and the people, flying with Cubana Aviacion in one of its rather ageing Russian Ilyushin aircraft, as it operates a service from Madrid to Santiago de Cuba, the starting point of my tour. 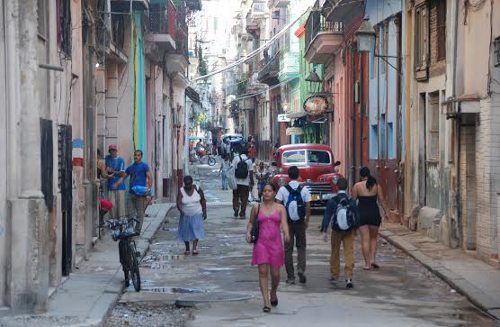 Visiting Cuba before the demise of the current political regime was a longstanding dream of mine and it seems I made it just in time since President Obama has finally started the long overdue negotiations to end the 50 year isolation of the island.

I chose a fifteen day circuit tour to learn as much as possible about the country and the people, flying with Cubana Aviacion in one of its rather ageing Russian Ilyushin aircraft, as it operates a service from Madrid to Santiago de Cuba, the starting point of my tour. It took me a half hour to locate my guide as I was the only member of my group on the aircraft. And when the taxi finally arrived at the designated hotel there was no reservation. A great start. However I was reassured in the morning when a tour bus arrived and the guide had my name on his list.

Santiago is Cuba's second city with a swashbuckling history. Philip II of Spain built a fortress to protect the port and with the Spanish and British constantly at war it became a haven for corsairs and buccaneers including Francis Drake, Henry Morgan and Alexander Selkirk. Cuba's history dates back to Christopher Columbus with the Spanish, British, French and Americans all claiming its territory at some point. Not surprisingly, the people are a mix of Spanish and African descent cohabiting together today in what appears to be perfect harmony. Santiago is also renowned for being the starting point of Castro's revolution and the burial place of Jose Martí, Cuba's national hero.

From Santiago the plan was to drive across the country to La Habana with stops in Bayamo, Camaguey, Ciego de Ávila, Sancti Spiritus, Trinidad, Cienfuegos and Verdadero. While most towns had pedestrianised shopping streets, the stores lacked lighting and their stock was limited. Nevertheless there were markets, cafés and restaurants bustling with people and especially, musicians. With all the old automobiles, horse driven buggies and revolutionary signs, mostly with Che Guevara peering from them, propped up by the roadside or on facades, it seemed as if time had stood still for half a century. Nowhere is this more apparent than in the small, beautiful colonial town of Trinidad, a world heritage site with cobbled streets, brightly coloured cottages, churches and squares.

Our driver made a detour to the infamous Bay of Pigs before crossing the island to Varadero, Cuba's answer to Miami Beach with its beach front hotel and leisure complexes, which have sprung up during the past few years. After an overnight stay in La Habana the next few days were spent in the west of the island. We visited Las Terrazas ecological park with its rice terraces, forests, rivers and farming villages, known for being the birthplace of Polo Montañez, one of Cuba's most famous composers and singers, whose death on November 26 2002 following a road accident was a national tragedy. We then headed for the coast to board a ferry for the half hour crossing to Cayo Levisa, one of Cuba's unspoilt tropical islands with miles of white sandy beaches. This was supposed to give us a welcome rest after so many days on the road. What was not in the script was a sudden tropical storm, which meant spending most of the morning in the bars set back among the mangroves. However after lunch the storm passed and the sun came out signalling a rush to the sea for a swim before returning to the mainland to pick up the bus to Vinales to visit a tobacco plantation and then back to La Habana to spend the final two days in the capital on my own.

I was booked into El Telégrafo, in the city centre but the hotel had no water. Fortunately I was offered alternative accommodation in the Santa Isabel, a colonial style hotel facing the Plaza de Armas in the old town. As the taxi driver extracted my case a very nice, smiling black gentleman, impeccably dressed with white shirt and black trousers welcomed me, took my case and accompanied me chatting away. It was only when the porter came out of the hotel entrance did I realize that he had nothing to do with the hotel. However he was so friendly I had to tip him too.

It did not take long to locate Hemingway's haunts - the hotel Ambos Mundos and Floridita bar - packed with tourists - in the main pedestrian street, Calle Obispo. It was evident from my walking tour of the old town that much of it needs refurbishing or rebuilding and given the city's long sea front along the Malecón, real estate prices are sure to rocket during the next few years. This is where the monument to the U S Maine stands as well as being the site of the Hotel Nacional, a symbol of Cuba's past. Another landmark, the fifteen-storey Hotel Riviera, near the U S Embassy, is reputed to have been built by and for the use of the Mob.

The embargo or «el bloqueo», has only resulted in austerity for the friendly Cuban people, who pose no threat or malice to their powerful northern neighbour. Despite being poor, lacking consumer products and perhaps freedom of expression, everyone benefits from free education and health and Cuban doctors are considered to be among the best in the world. I saw no homeless on the streets, less begging than in Europe's cities, home ownership is allowed, with little or no debt, and privately owned family run restaurants – Paladares - serve excellent Cuban food.

Perhaps the country and its people can now look forward to a more prosperous future so long as there is not a return to the rampant capitalism and corruption, which prevailed under the Batista regime. The Museo de la Revolución, located inside Batista's old palace, provides a vivid account of the revolution, the rise to power of Castro and Che Guevara and the subsequent conflicts with the USA. In the grounds in its own glass structure, stands the «Granma», the yacht, which brought Castro and his revolutionaries from Mexico and several remnants of U S aircraft, presumably shot down. I hope the museum will be preserved for future generations long after the Castro regime has gone. But what will happen to the classic American cars and trucks from the 40s and 50s, which I had come to photograph? There are an estimated 35,000 of them on Cuba's roads. And will the provocative «Venceremos» sign on the wall opposite the U S Embassy be preserved when it reopens?

My final thought was that a nation whose national hero, Jose Marti, was a poet, a people with music in their soul and who ask for pens, deserves a better deal. 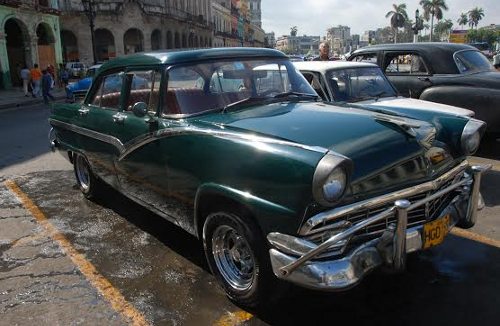 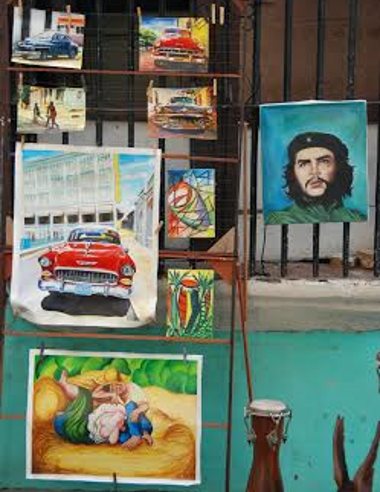