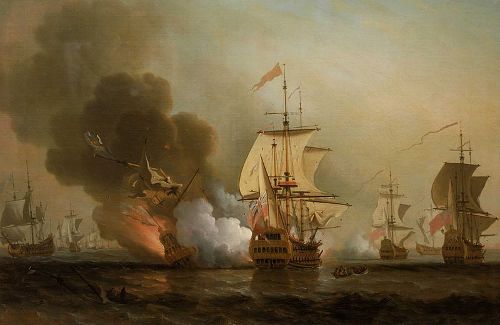 When Charles II of Spain, the last Hapsburg King, died without an heir in 1700, it led to a dispute in Europe over the succession. Louis XIV of France expected his grandson, Philip, the Duke of Anjou, to take the crown, but Leopold I, Emperor of the Holy Roman Empire, preferred his own son Charles. Great Britain, the Dutch Republic and Austria could not allow a potentially dominant Franco-Spanish allegiance and in 1702 the «Grand Alliance» declared war on France. The War of Spanish Succession was to last eleven years dividing Europe as well as Latin America.

To finance the conflict, Spain relied on extracting gold and silver from its Latin American colonies, shipping the riches across the Atlantic in its warships. The role of Britain's naval forces was to prevent the ships from reaching Spain. In April 1708 Admiral Wager left England to sail to the Caribbean with a fleet of four warships; the Expedition with 70 guns, the Kingston, 60 guns, Portland, 50 guns and the Vulture, a fire ship. When they eventually reached the Colombian coast they anchored off the island of Pequeña Baru, about 30 kilometres from Cartagena, to take on supplies.

Their presence was spotted and a message sent to the commander of the Spanish fleet in Portobelo, Panama, where more than a dozen merchant ships were being loaded with produce and goods. They were to be escorted by three Spanish galleons; the San José and San Joaquín both armed with 64 guns and the Santa Cruz, 44 guns. The San José and its sister ship San Joaquín had been designed by naval architect, Francisco Antonio Garrote and launched together in 1698 at the height of the golden age of Spanish shipbuilding. The warships had another purpose. Their holds were crammed with a massive quantity of gold, silver, emeralds and other jewels extracted from the Potosí mines in the Spanish colony of Peru with the two larger vessels carrying most of the treasure.

However the commander, Jose Fernández de Santillán, worried about the oncoming hurricane season, could not delay his departure and the convoy began its long journey to Europe planning first to stop in Cartagena. On 8 June they moored for the night off the island of Barú. It was not until the following afternoon en route towards Cartagena, that they saw the four British warships bearing down.

The Kingston engaged the San Joaquín first but after a prolonged skirmish, with daylight fading, the Spanish warship managed to escape into the night. The Expedition turned on the San José and in the middle of a close encounter, which lasted more than one hour, its powder magazine suddenly exploded. It sunk rapidly leaving only eleven survivors out of a crew of six hundred. The British warship felt the searing heat and was struck by burning timbers raining down onto its decks, which quickly had to be thrown overboard. The Santa Cruz was eventually captured but it was carrying very little cargo. Admiral Wager set off in pursuit of the San Joaquín but turned away when it approached Cartagena, not wishing to face the powerful guns protecting the fortress.

There are thousands of valuable wrecks scattered around the world's oceans sought after by underwater treasure-hunting companies using sophisticated technology to find their prize. In 2001 the UNESCO convention was accepted by most of the world's leading nations to ensure that underwater wrecks and their cargos are protected and rightfully belong to the countries in whose jurisdiction they are found.

The San José, whose cargo was considered to be worth more than the whole national annual income of Spain at the time, has always been considered the Holy Grail of Shipwrecks with its location sought after by treasure hunters. In 1982 a private treasure-hunting firm, Glocco Morra, believed it had located the whereabouts of the warship and it sold its rights to a US company, Sea Search Armada, which claimed a share of any treasure found. However in 2011 a US court judged that the ship and its contents belonged to the Colombian Government.

Last November 27 an expedition led by the Colombian Institute of Anthropology and History, ICANH, in conjunction with the Colombian navy and a team of international scientists finally discovered the warship identifying objects on the seabed. Juan Manuel Santos immediately claimed the ship and its contents belonged to Colombia under the 2013 Colombian law aimed at protecting its underwater cultural heritage. The law also provides for sharing some of the proceeds with private companies participating in the search and salvaging of wrecks and their cargos. The President's claim was immediately contested both by Spain, which argues that the ship still belongs to the Spanish State, and Peru from where the gold and silver originate, although at the time it was a Spanish colony.

Nevertheless Juan Manuel Santos announced plans to build a museum in Cartagena to house the remains of the vessel and its riches. While this may be the most logical solution, to avoid any diplomatic discord, given the value of the find surely some of the treasure could be shared with Spain to exhibit. The Spanish Government can perhaps consol itself with the treasure found in 2012 on another galleon, Nuestra Señora de las Mercedes, sunk, once again by the British, off the coast of Cadiz in 1804. Its cargo of over 600,000 silver coins and precious objects is housed in a Spanish museum after a long legal battle with the United States.

©peter fieldman, author of «The World at a Crossroads» published in London