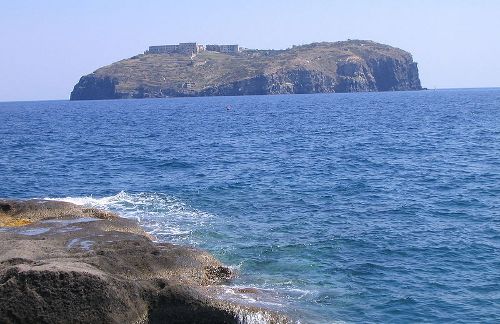 Growing concern over the influence of Islam and its radical factions coupled with massive illegal immigration caused by poverty and military conflicts in Africa and Asia, has led to the rise of populist political parties across the continent bringing with it the fear of a return to right wing extremism.

Instead of a European utopia we face the break-up of the European Union and the end of the dream, which began on a tiny island off the Italian coast in 1941.

Ventotene is a small volcanic island part of the Pontine archipelago off the west coast of Italy in the Tyrrhenian sea between Rome and Naples. First used as a prison during the Roman Empire, Mussolini chose the island to incarcerate Italian antifascists, many of who were communist intellectuals. Among the inmates were Sandro Pertini, Eugenio Colorni, Ursula Hirschmann, Ernesto Rossi and Altiero Spinelli. It was here in 1941 that the dream of a united Europe was first nurtured. Having grown up under fascism their theory was that while the existence of the nation state had made great progress, giving the people an identity, a culture and a language, sovereignty invariably resulted in political and economic power of the elite over the people. They had witnessed how totalitarian regimes had transformed nation states into military powers whose aim was to dominate others seen as a threat. The loss of civil liberties enabled nations to become machines of war and peacetime was simply an opportunity to prepare for future armed conflicts.

Rossi and Spinelli began to work on a political manifesto, which laid down their ideas for a federation of European states, which would, in their view, prevent future military conflicts and the rise of totalitarian states. The statement set out a number of ideals, which they believed were fundamental in establishing political and social reforms across the continent.

Their paper was called 'Per un'Europa libera e unita. Progetto d'un manifesto' («For a Free and United Europe – a draft manifesto»). The Ventotene Manifesto, as it became known, was initially circulated secretly among the Italian Partigiani resistance movement until 1943 when the island was liberated by the Americans. Colorni and Hirschmann were married but he was killed in 1944 just before the liberation of Rome. Pertini, Rossi and Spinelli all survived the war and continued their political careers. Pertini went on to become President of Italy, while Rossi and Spinelli remained outspoken advocates for the Movimento Federalista Europeo, the European Federalist Movement. Hirschmann had met Spinelli in Ventotene and drawn together after the war they spent the rest of their lives together.

Many of their proposals were implemented in the years that followed the war, which saw democracy and peace as well as major political and social reforms spread across the European continent. Spinelli's greatest satisfaction was to witness the creation of the Common Market and then the European Union.

However as communists, the writers believed in pure socialist principles and the Manifesto followed that doctrine. The struggle was against social inequality and privileges; those who owned nothing had the same rights as wealthy landowners; capitalistic economic forces should not control the people but be subject to control by the people so that the majority of the population would not become victims of the system.

They were against monopolies being in private ownership and believed that sectors for the common good such as electricity, water etc, or required subsidies to survive, should all be nationalized. Agriculture would be organized around cooperative farms and mass-produced goods of necessity – food, housing, clothing and a minimum of comfort – must be available to all.

Today in Europe many of the Manifesto's ideals are taken for granted such as free education, the end of totalitarianism, freedom of speech, access to housing and the right to participate in the process of government. There have never been so many social and economic advances and more than seventy years of peace since the end of the Second World War has enabled Europeans to live and work together.

But regrettably the beginning of the twenty first century has also seen many of the original objectives torn up and discarded by a society, which has become corrupt, too selfish and greedy in the quest for political power and monetary gain. Instead of looking after the wellbeing of the people Governments have pandered to the demands of the elite to preserve their privileges. The financial crisis has brought to the surface the growing disparity of wealth and inequality thanks to the expansion of the global economy and advent of new technology.

The significance of unions, once staunch protectors of the working class, has been radically weakened. Lack of regulation has allowed the financial and corporate sectors to help themselves to the nation's wealth through massive earnings, privatization of national assets and the use of tax havens. Instead of a fairer society, private property and inheritance laws are aimed at maintaining the wealth and privileges of the elite to the extent that the wealthiest eighty-five people in the world own more than the three billion poorest people on the planet. And while in the richest nations the privileged elite has seen its wealth and power increase, austerity measures have caused severe hardship to a substantial percentage of the population.

After six years as a European commissioner, Altiero Spinelli became a Euro MP for ten years until his death in 1986 at the age of 79. The main European Parliament building in Brussels bears his name. In the last years of his life with a long white beard he looked remarkably like another European visionary, Victor Hugo, who almost one hundred and fifty years earlier had also dreamt of a united Europe. Were he still alive, Spinelli would be disappointed at seeing the Europe he helped create in such turmoil and confusion.

If the European Union is to survive the present crisis political leaders should take another look at the Manifesto and its objectives in order to revive the dream of one of its founding fathers.

*Peter Fieldman is the author of «The World at a Crossroads», published by Austin Macauley Publishers in London, a book about the social impact of the crisis in our European societies.