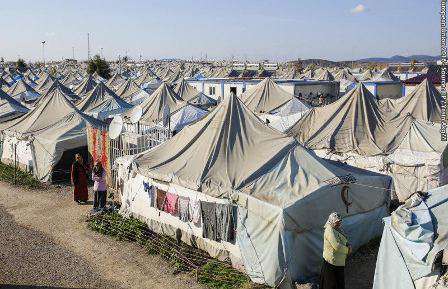 What was hoped to be a major transformation of many developing nations into democratic and more liberal societies somehow led to more chaos and uncertainty with ethnic and religious conflicts in North Africa, the Middle East and Asia, which have now embroiled a totally unprepared Europe.

The chaos in Libya led to the country becoming the departure point for migrants from North and Sub-Saharan Africa prepared to risk their lives crossing the Mediterranean to Lampedusa and Sicily. The razor protected steel fences dividing the Spanish enclaves of Melilla and Ceuta with Morocco have not deterred desperate Africans from attempting to reach what was for them European soil.

The creation of the Islamic State and the war in Syria forced millions of families to leave their homes and seek refuge in the neighbouring countries of Turkey, Lebanon and Jordan living in makeshift camps. While the major Muslim states in the Middle East, the Caucasus and Asia seemed to ignore the plight of their neighbours, with no end of the war in sight, instead of asking for asylum close to home, refugees began to make the perilous sea crossing to the Greek islands off the Turkish coast. They were joined by migrants from Iraq, Iran, Afghanistan, Pakistan, Bangladesh and African countries intent on seeking asylum in Europe.

The trickle of migrants crossing the Mediterranean has turned into an endless mass push bringing frontline European states such as Greece to the brink of economic and social collapse. Despite being illegal, once on European soil, the migrants have been allowed to either stay in southern Europe or travel northwards to the more economically prosperous northern European nations. Given its economic strength and Angela Merkel’s invitation, Germany has become the principal destination while the stable political and social environment and the English language have made Great Britain and Scandinavia attractive locations.

Nevertheless while thousands of migrants are fleeing conflicts, a substantial number are escaping poverty and dictatorship regimes simply seeking a better life, which they believe can be found in Western Europe. Europe’s generosity has reached saturation point. Granting asylum to a few people whose lives are threatened is a tradition but accepting vast numbers of migrants sends a signal to millions living in poverty in Africa and Asia to join the refugees in the hope of gaining entry to the European continent.

As more and more people risked their lives to reach Europe, it became the catalyst for a new lucrative industry of people traffickers. Criminal gangs realised they could make fortunes by exploiting desperate people prepared to pay to reach Europe often using false identities to achieve their goal. The traffickers have effectively taken over Europe’s border controls.

The migrant crisis has become an explosive issue dividing European Union member states, political parties and the people. Civilised democratic nations rely on their constitutions, laws and justice. But these have been forgotten or ignored as the number of illegal immigrants from other continents entering Europe has increased to the extent that Governments don’t know who is entering their countries, where they go, or what they are doing, endangering the fabric of our societies.

Vaunted by human rights organisations, politicians and business leaders, the advantages of immigration are a contentious issue. For every successful educated, immigrant from another continent, there are thousands more, who need work to send money back home. They are often exploited as a source of cheap labour or set up ethnic restaurants, cafes or corner stores with imported products, which may not comply with European standards. Most immigrants are poor, uneducated and yearn to bring their families. Many end up housed at a substantial cost to the state and have difficulty in integrating into western societies.

For years immigrants from Africa and Asia without papers or resources have disappeared into western cities engaging in the underground economy. They have been allowed to live in tents, beg or pray in public places, take on undeclared, low paid illegal work for unscrupulous employers and openly sell counterfeit goods on the street or holiday resorts. They plant themselves at supermarkets, cafes, car parks and traffic lights, expecting money or end up in crime and delinquency running fraud, pickpocket and prostitution rackets or dealing in drugs.

Despite their illegal situation, instead of facing deportation, illegal migrants simply go about their business unhindered as Europe’s Governments have tolerated two-tier states with different laws. Suburbs of many cities are virtually run by Kalashnikov touting gangs and are no go areas for police forces. In the streets of many of our towns and cities heavily armed military patrols have become a regular sight, testifying to the growing incapacity of our political leaders in handling the migration crisis and criminal and terrorist activities, which are linked.

Campsites such as Calais expanded to accommodate thousands of migrants from around the world whose aim was to reach Great Britain, except nobody asked the English Government if they would accept them. Refugees, economic migrants and trafficking gangs mingled in a squalid lawless jungle where illegal activities were allowed to flourish. The French blamed the British for refusing passage, while the English blamed the French for allowing the migrants to remain and attempt to cross the channel using every illegal means at their disposal from walking the tunnel to hiding in vehicles or storming ferries.

The migrant crisis has led to confrontation between the political leaders in Brussels and the EU member states as well as human rights groups, charity organisations and ONGS over how to deal with the increasing number of migrants. One of the pillars of the EU – the free movement of people and Schengen - is being challenged. It is only a decade since the ex communist eastern European countries joined the European Union beginning what became one way traffic as hundreds of thousands of workers from the poorer ex communist countries headed west to find better paid jobs.

Enlarging the EU and extending Schengen is now accepted as a major strategic error with Europe’s frontiers transferred to a vast uncontrollable area bordering Russia and Asia. Several countries have erected fences along their borders to try and stem the flow of migrants arriving through the Balkan States and Greece from Turkey. The shutting down of the camps in Calais forced Belgian to re-establish road controls along its border with France (*).

The proposal to introduce quotas to share the burden of the migrants has not been accepted by the majority of the Eastern European nations and would not work. For the same reasons, which pushed eastern Europeans westwards, few migrants if any, would remain in Eastern Europe where they do not speak the language, could find work or receive social benefits and they would simply travel to Western Europe.

The consequence of this influx of millions of illegal migrants has been the rise of populist or extremist parties giving them a strong voice in many member states, including Germany, resulting in a backlash against immigrants and immigration across the European continent with extreme groups using violence to voice their opposition and resentment of Government inaction.

Muslims have been the principle targets of the anti-immigration lobbies due to the influence of the religion over its followers. The growing Muslim population in Europe often seems to settle in segregated communities living according to strict Islamic laws making it difficult to adapt to or join mainstream western society. This ghettoisation of ethnic minorities has been a factor in the rise of radical Islamic groups in Europe resulting in a rejection of our values and the terrorist attacks in Paris, Madrid and London.

The question now is how to deal with a situation, which can go out of control, exacerbated by the growing violence around the world by radical Islamic groups intent on imposing the Islamic state and destroying western culture and our way of life.

Since most of the current influx of migrants originates from Muslim countries it is natural that many Europeans are concerned about their security and the impact on our way of life due to the incompatibility between Islamic laws and Europe’s democratic Judeo/Christian and secular societies. Yet this has not prevented Europe’s leaders from negotiating with Turkey what amounts to a trade deal with human lives offering the carrot of Turkey and the Balkan States, with substantial Muslim populations, becoming members of the European Union.

It is not immigration which is the problem but the uncontrolled sudden arrival to Europe of hundreds of thousands of undocumented and unexpected migrants. According to international laws asylum seekers have to make their demands in the first country they enter and not cross the world. The fact that most migrants refuse to seek asylum in a neighbouring state or any of the countries they pass through in Africa or the Middle East has created a legal void and humanitarian dilemma. By refusing to ask for asylum status once they reach Europe they become illegal immigrants and should face immediate deportation.

No law-abiding state can allow foreign citizens, regardless of their status as refugees, asylum seekers or illegal migrants, to defy police authorities, break down frontier barriers and demand to live where they want. If Europe needs immigrants, nations have a right to choose who and how many should be granted visas and the right to work. It is neither sustainable nor justifiable for Europe to continue to accommodate millions of refugees from North Africa, Asia or the Middle East with vastly different cultures and religions simply because they no longer wish to live in their own countries.

Neither can Europe accept the tens of thousands of economic migrants who cross the world illegally each year to seek a better life. In the aftermath of the financial crisis, which has left millions of Europeans unemployed, there is no guarantee of achieving their goal. The intolerable situation in Greece and Macedonia could have been averted if it was made clear to the migrants that Western Europe simply cannot provide everyone with a new home.

It has been estimated that there are around two hundred and fifty million people in the world prepared to migrate in search of a better life. To stem the flow requires a change of mentality. The rich western economies and the United Nations need to introduce a Marshall plan with the aim to end conflicts, wars, corruption and exploitation and instead, invest funds to develop the economies and improve living standards in the world’s poorer nations. Open borders and the multicultural society might be an utopian concept but with the world’s population expected to reach eight billion people sometime this century coupled with differences in culture and religion as well as massive inequality which is driving the migration, it is an impossible dream.

We live in a world of nation states. That is why the United Nations was created. A nation state can only exist with national borders and laws otherwise it ceases to have any purpose. While heads of state love pomp and ceremony and fly the flag when it comes to international summits and official visits, the concept of the nation state in Europe and our national identity has been eroded both by the construction of the European Union and the porousness of borders.

Schengen worked when the European Union was a privileged western club. The enlargement to twenty-eight member states unable to agree on political, financial, fiscal, immigration or social harmonization, has created an unmanageable bureaucratic monster. The economic recession has led to several member states, including Great Britain, seeking reforms or threatening to give up E.U. membership. The migrant crisis might well signal its demise.

(*) This article was written before the terrorist attacks which have taken place on March 21rst at the airport and Maalbeek underground station of central metro line in Brussels.